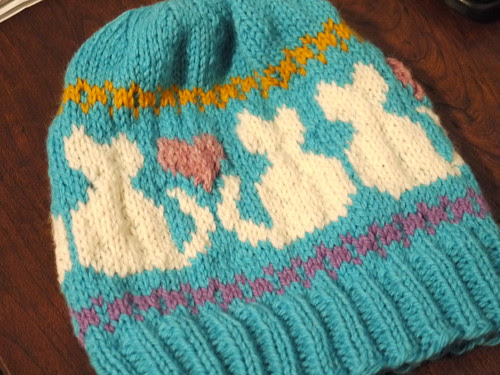 This is the sort of hat I imagine people who love their cats too much would wear (ahem...). But I designed the entire thing! I am very happy about that =) The motif is two white cats with a heart floating between them, repeated three times around the hat. At first I planned to knit each cat a separate color with stripes and stuff, but realized that would be a lot of freaking Intarsia. As it is, the hearts are Intarsia but everything else is Fair Isle. Fair Isle makes me happy.

All the yarn I used was leftovers from other projects. I'm trying to work through the stash. Mostly I used Patons Classic Wool (Aquamarine, Aran, and Lilac, I think), and some Lion Brand Wool Ease in Gold and Rose, or something like that.

Cat Hat is a bit kitschy, and I'm not sure how often I'll wear it but I watched season one of Glee while knitting and was emboldened by Rachel's animal sweaters. so there.
Posted by Unknown at 10:02 AM