I'm a BIG fan of the Pen Addict and have been following the blog for a few years now. The pen reviews are fantastic and I've gotten some good insight on more than a few pens. Last week Brad held a giveaway for some Sharpie 80s Glam Markers, and guess who won?  =)

A little bit of sunshine in my life

Farmer's Market this morning! For carrots! and books (none were had) and flowers (a kind gift)! I think lupines might just be my new favorite =) 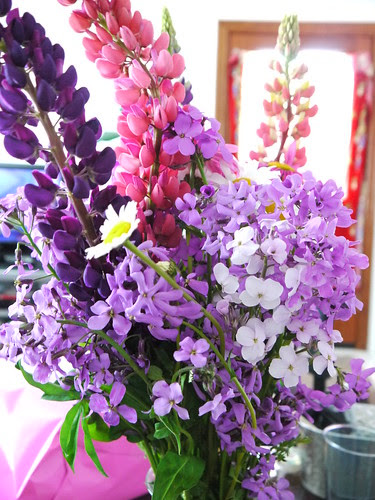 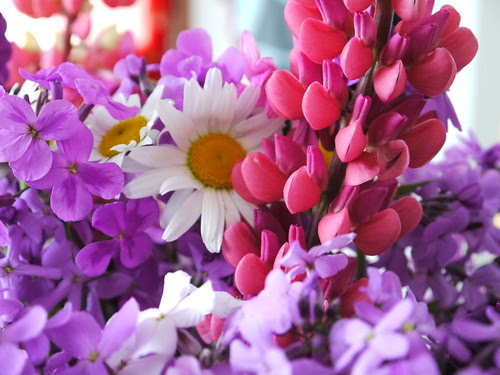 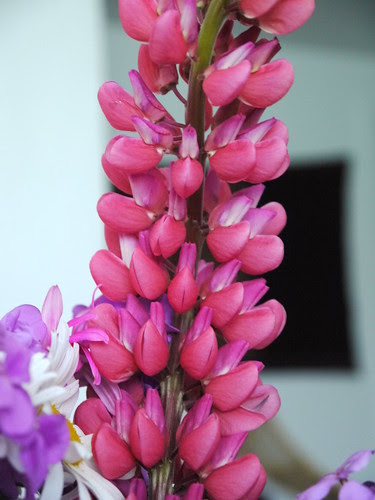 Thanks Tubbee!
Posted by Unknown at 10:03 PM No comments: 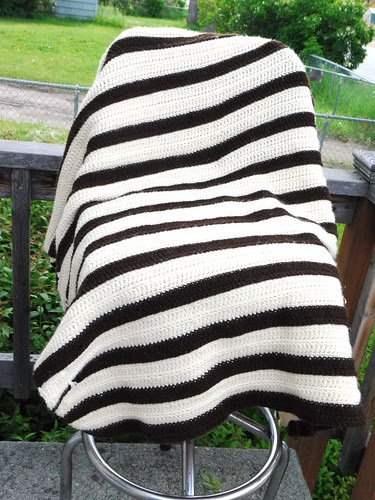 I'm not so sure this one should count towards the challenge because I started it in June. LAST year. But this was the first afghan I started to crochet! Since starting it, though, I've started and completed at least four or five other afghans. I chose this pattern (which I got from Michaels, I think. One of those free project sheets) as my first afghan because I thought it would be easy and simple. But it was very monotonous. And it's not very large either. Comparatively, the Round Ripples were much more interesting and fun to crochet than this one.

Yarn is Caron's One Pound in espresso and cream.

And now it's finished one year later!!
Posted by Unknown at 9:54 PM No comments: 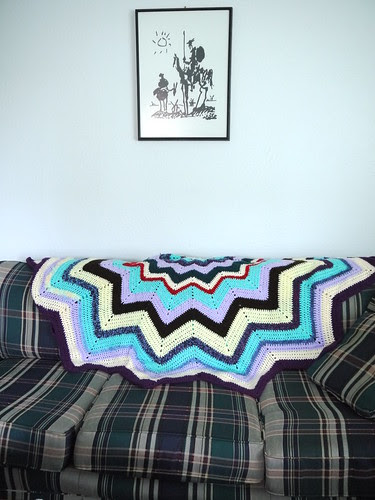 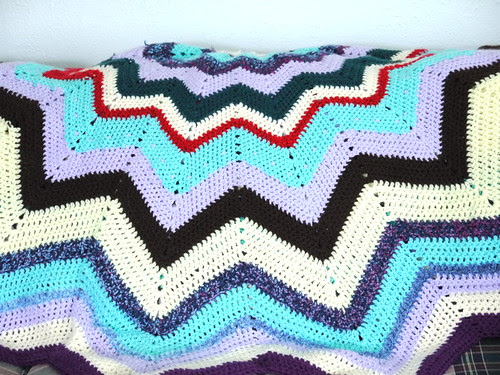 I began crocheting this afghan at the start of 2011 I believe. I neglected it for a few months but finally pulled it out of the closet to work on it. Mainly to continue whittling my yarn stash, but also to have a new afghan! In hindsight, the brown rows are entirely out of place, but I do enjoy the other colors.

Also, it clashes awfully with our plaid couch!! But I'm blind to it, unless I look at it through other people's eyes.

There's some Red Heart, Caron's, and Jo Ann's Sensations. I think those are the only brands I used, if you can believe that. Crochet hook is 5.5 mm. And the pattern is Lyn's Round Ripple afghan which I also used when I made Beth's afghan. I absolutely LOVE this pattern!

To give you an idea on how large this one is, it almost fits our queen sized bed. That is, it doesn't quite touch each side or hang over at all. It would work nicely on a twin though!
Posted by Unknown at 9:44 PM No comments: 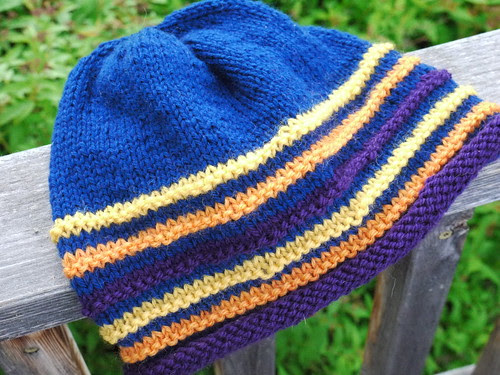 This is an altered Garter-Ridged hat from 60 Quick Knits, only in different colors, and a slightly different decrease at the top (and I added more purl rows up the hat).

I really like the colors together, but I think I might try a different interaction. Probably Fair Isle. The purple is Patons Classic wool. The blue and orange are Cascade 220 (sorry I don't have the color numbers on hand...if you really want it I can look for them). And the yellow is Knit Picks Wool of the Andes.

I think this is one of the more masculine hats I've ever knit....but I can't think of any men in my life who'd wear it ;)
Posted by Unknown at 9:32 PM No comments:

Farmer's Market
Bridal shower
Post pictures of FOs
Work on current UFO
Try to finish book for Sunday's review (and it's not going so well, because I'm not fond of the book)

Expect more posts today (that have complete sentences)
Posted by Unknown at 9:13 AM No comments:

My world has been turned upside down. I'm beside myself. I don't know what to do.

It has recently been brought to my attention that coffee beans should NOT be stored in the refrigerator. Go ahead and Google it if you don't believe me. There are many articles and discussions about this.

I refrigerate my beans because my parents refrigerate theirs. Apparently coffee beans are porous and can absorb other fridge smells. Also, the moisture is not good for coffee. All the articles you will read about coffee storage say to avoid light, moisture, heat, and air (oxygen), and store in air-tight ceramic containers, not plastic. O bother.

There's more than a pound of Cravens coffee in our fridge, in a plastic container.
Sheesh.
Posted by Unknown at 11:44 AM No comments:

I know it's silly to want a new project, especially since I already have at least three going right now, but doesn't this Psychedelic Afghan look super neat? It's knit, and I haven't yet knit an afghan.

It started with these:


and ended with these lovely gals: 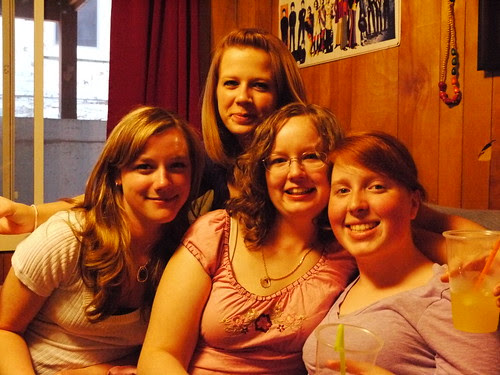 Best girls to work with EVER!
Posted by Unknown at 8:45 AM No comments:


I originally purchased Castle for a class, where it turned out I needed a different title (Pieces for the Left Hand, which is, incidentally, very good) by J. Robert Lennon. Castle sounded very intriguing so I never returned it.

The pacing in Castle is very controlled, even though at times, the story moves along slowly. It's about a man named Eric Loesch who returns to his hometown for reasons unknown to the reader. There he purchases a run-down home in the woods and renovates it. The renovation consumes the first quarter of the book, but it never gets boring. I owe this to Lennon's ability to reveal hints at crucial times that are both mysterious and intriguing. Eric Loesch in the novel is very methodical, and the way Lennon describes him is very methodical. Which makes me wonder if Lennon isn't very methodical himself?

There are times when Eric is a closed narrator, and his thoughts aren't known to the reader. This did confuse me towards the end (without giving anything away) but I think it's just a further facet of Eric's character. Because not only does he close himself off to his community members, he also closes down to the reader, which is actually kind of cool because I didn't even realize it while it was happening.

Castle can be a little spooky at times because of its psychological tendency. Lennon is a great writer and chooses his words very carefully; I found this out in Pieces for the Left Hand, which is a collection of micro fiction.


I would read this book again, and am excited to read more books by J. Robert Lennon.
Posted by Unknown at 11:43 AM No comments:

I've decided to write a book post every Sunday, to review what I'm currently reading, what I want to read, etc. As it is, my To Read books take up a shelf of their own in a bookshelf. I think this will be a good way for me to keep reading, since it often gets sidelined because of other things. 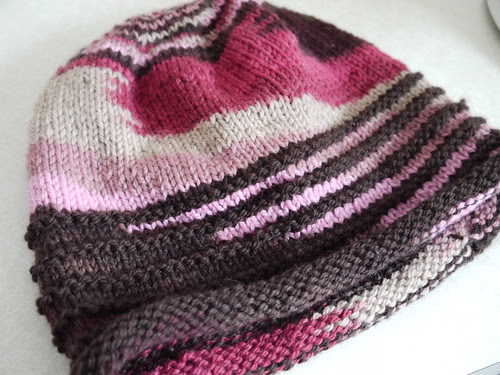 In other news, my cousin Katja loves the Garter-Ridged hat so much, that I sent it to her =) It tickles me when people want to wear my knit stuff! 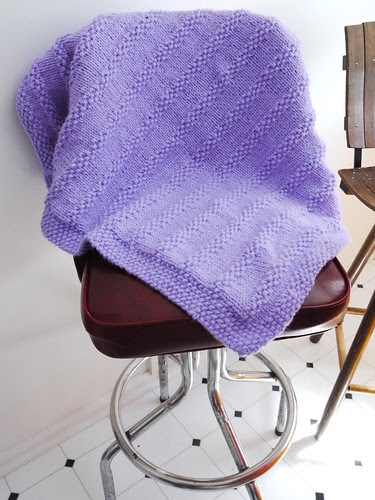 I am also fiiiinally sending the baby blanket I knit for Molly Madison...she's probably outgrown it by now though. But I washed it to see how it would wash up, and it's so much softer now! I think it will only get softer with every wash too.


Perhaps this rain will let up soon? I have Saturday off again so I'm definitely going to Farmer's Market again!

Posted by Unknown at 1:52 PM No comments:

I couldn't resist, what with all the talk about Weiner's weenie on Twitter, and a memory of my friend selling hot dogs at concessions and putting two dogs in one bun then telling people they were the "weiner!" for getting two....


I won a prize from Loopy Knit/ Crochet for the Shop Hop! It's a Namaste bag and it's beautiful.
It folds out and can hold crochet hooks or double pointed needles, scissors, and other little notions. I feel like I am officially a cool knitter now that I have a Namaste bag =)))

Also, I really wasn't expecting to win anything when I started the Shop Hop, so this is ultra neat. I thought it would be nice to, but I was more interested in visiting other local yarn stores and driving around with Scott. I know the whole experience was fun for me, and I hope he enjoyed some it too =)

(I also purchased some Berroco's Ultra Alpaca while I was at Loopy. Pink and green hat is in the works.)
Posted by Unknown at 12:15 PM No comments:

Working for the weekend

A little recap of the weekend:

Saturday: I was finally able to make it to Farmer's Market! I met Tera there, and it could not have been a more beautiful day! I bought a couple bunches of carrots from Tubbee and Long, but they did not have cucumbers yet (it is too early). Next weekend I'll have to buy more carrots, though, because we've already eaten half of them! They are so sweet and crisp; I have missed carrots.

Tera and I also happened upon a cart of free books outside of Fact & Fiction. We almost didn't stop, but I am so glad we did. They are the advanced copies sent to bookstores and can't be sold. I took Isabel Allende's memoir The Sum of Our Days, Ray Bradbury's We'll Always Have Paris, Ann Brashare's 3 Willows, and a couple more.

After the Market, Scott and I went camping...even though I was still hesitant because of the ticks. We were almost there when I realized I forgot my sleeping bag... Instead of my suggestion of me sleeping in the running car (joke), we turned back and borrowed one from his parents, which was quicker than returning home and grabbing mine.

This was the maiden voyage for Scott's new tent. It's a two-person and is supposed to have an impeccable rain fly. We'll have to do some west coast camping to test that. I remember camping in Oregon a few years ago with a tent that wasn't very water proof and we didn't have a tarp. We got soaked. On top of that, the place we camped was near a stream and there were slugs EVERYWHERE. Never again.

The campsite we stayed at had been occupied recently. The last campers left us plenty of firewood. They also had built a little lean-to, which we stored the wood in. I am getting pretty good at splitting logs =)

We set up camp around four or five pm (would have been earlier had I not forgotten my bag...) and there was plenty of daylight. I hate trying to set up a tent or make dinner in the dark. I even had a few hours to knit and read! I brought my socks to work on, and they still smell like campfire =)

Sunday: We walked around the area a bit. It was gorgeous: 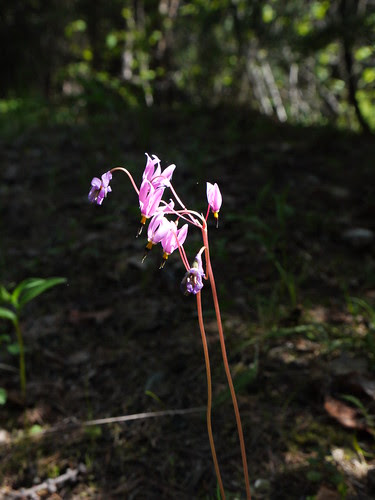 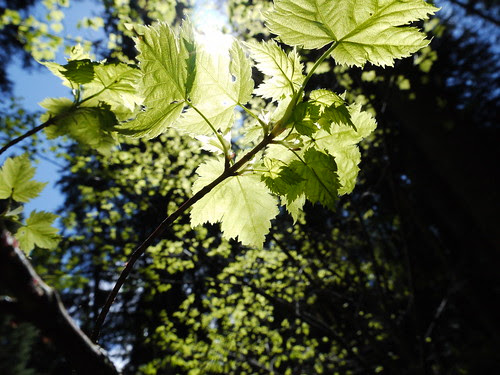 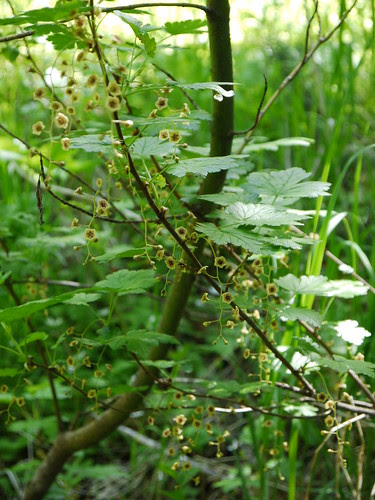 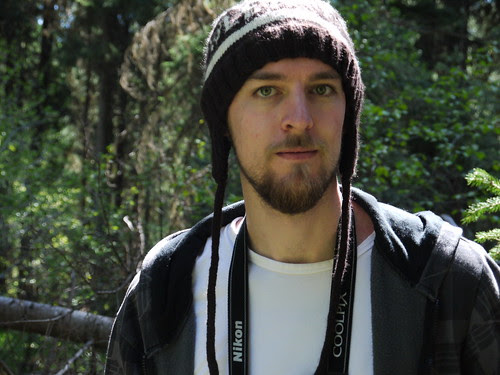 And guess what the very best part was? No ticks!
Posted by Unknown at 1:27 PM No comments:

I must've been crazy.
Two socks at a time on Magic Loop... yarn is everywhere, needles are everywhere...
too freaking fiddly.

That's what I was thinking last night when I cast on my first serious attempt at socks. But when I fell asleep, all I could see were the tiny needles and the thin thread, the miniscule stitches. The first thing I did today (even before making coffee, yikes!) was knit a few more rounds!

I am only on the cuff, but it's very encouraging and exciting to see the progress! 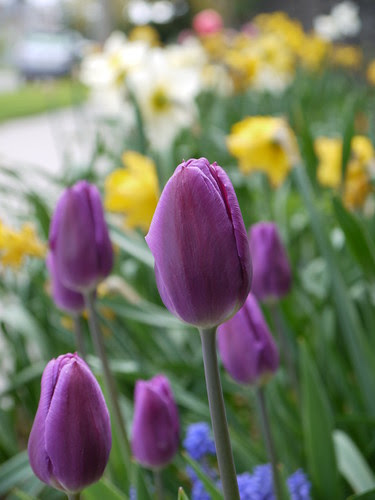 Flower photos that didn't make the Shop Hop post.
Posted by Unknown at 10:57 AM No comments: