Hi friends! I hope everybody has been enjoying their weekend so far. Thank you for your reading recommendations in last post! I might be out of my reading slump! I finished Stardust and am close to finishing The Night Circus. And I have several other books lined up :) I also read Eleanor and Park by Rainbow Rowell -- which I think everyone has read but me, and I am still obsessed with it. Going to start Fan Girl soon :)

I made a bit of progress on Scott's socks: 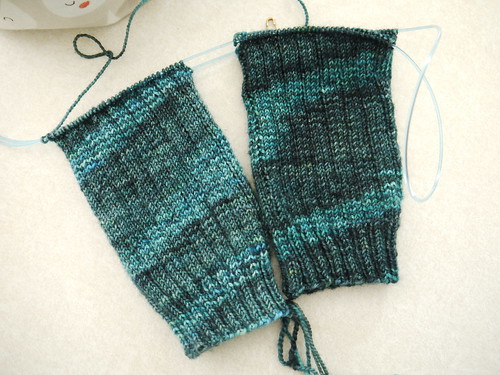 I am not in love with these socks. I am not wild about the pooling. I am not crazy about the color. But the more I knit, the more I kind of like them. This is about five and a half inches, and I am not ripping it out! The pattern is Thuja and the yarn is Knit Picks Hawthorne in Mount Tabor colorway.

This is my first two at a time pair in a long time. Every once in awhile I stop and think, wow, this is taking forever! But then I look at the socks and I remember there are two, and then it feels fast :)

These are my first entry for My Sister's Knitter Stash Down KAL! It's not the oldest yarn I have but it counts! This is going to sound ridiculous, but my goal for this stash down KAL is to knit 2500 yards !!! It would feel good to knit that much stash yarn. 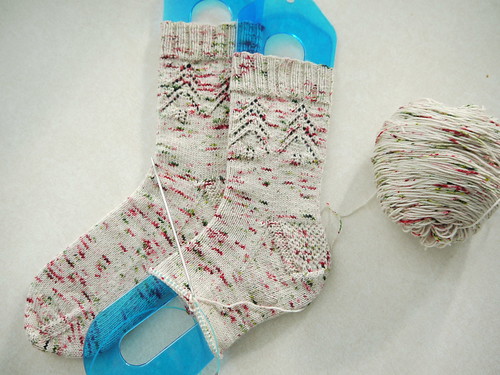 These Evergreen socks are getting so close! Just a few more inches before I start toe decreases. I'm going to try and finish them during the Superbowl tomorrow! Gah, I hope it's a good game and not like last year! I'll be cheering with Melissa and the Seahawks!!! woooo!


My February socks are planned. I received this super pretty skein from The Little Mount Yarn Co this week and it's having a hard time staying skeined: 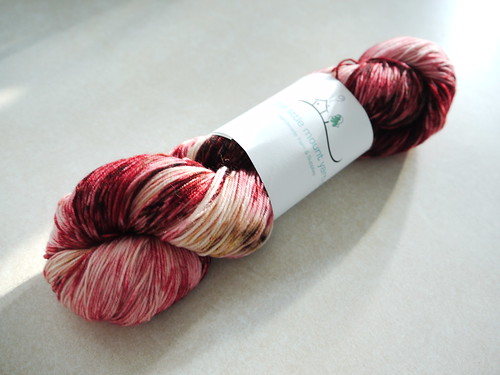 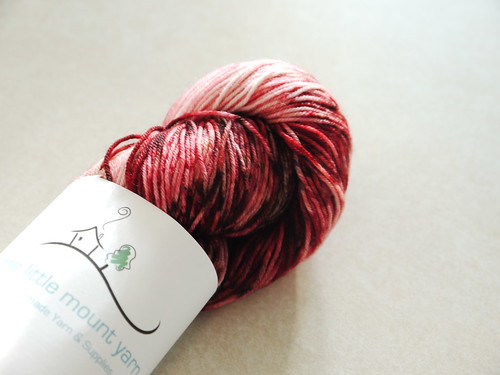 The pattern I'll use is Allons-y!!! by Jennifer Thomassian because it has x and o cables. I have no idea what/who/where allons-y is, except that it's Dr. Who related ! Please don't hold that against me!! 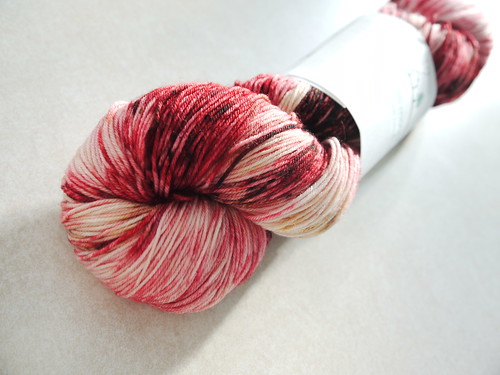 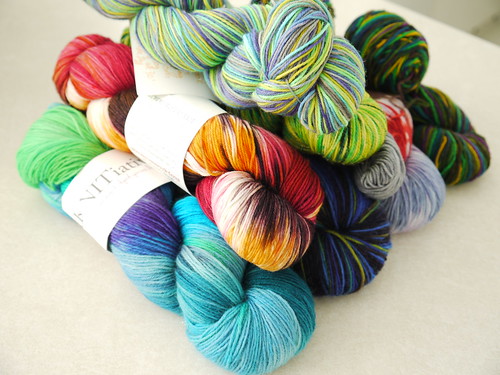 I went through my stash and pulled out skeins that I really want to knit this year. One was gifted to me. Two of them I won in contests! One started out as a shawl but was frogged later. My stash got a little out of control during 2014, where I was buying yarn left and right without any reason except that it was pretty and I loved it. Which is a good excuse!! But it left me with a lot of lovely yarn that have no project plans. They are all special, and all of them deserve to be knit up.

Like, can you believe this skein is still not socks??? 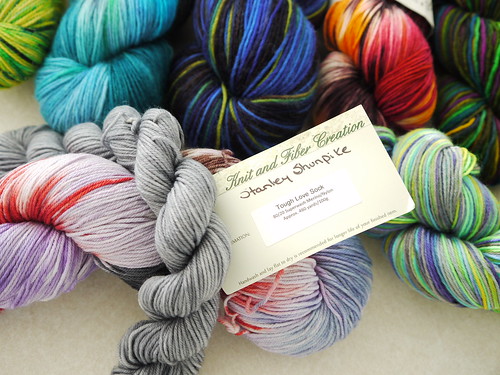 It's going to be knit up while I finish rereading the HP series. Last year I left off on book five (is he even in that one??)


I'm still planning on knitting other sock yarn (obviously...I just bought Valentine yarn, bwahah). But it's my goal that each of these skeins be knit by the end of 2015! 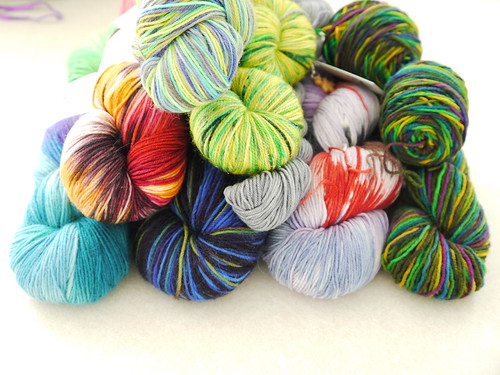 That's it for me! Hopefully next time I'll have some finished socks to show! Happy weekend! xx
Posted by Unknown at 5:08 PM No comments:

I'm spending this Friday night listening to Taylor Swift's 1989 (thanks Shari!) and writing a blog post... so wild :)

I want to share my first finished object for the year! 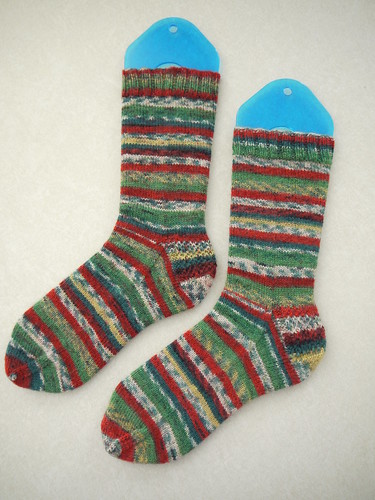 These were my Christmas socks I started in December. Even though they were started last year, I still count them towards my 2015 sock and yardage totals.

The pattern is a simple 64 stitch vanilla sock, with modified eye of partridge heel. The yarn is Red Heart and Sole in the Christmas colorway. I saw a blogger knit a pair in this colorway years ago, and ever since then, I've wanted to knit a pair too! I haven't worn them yet, but I think the yarn will hold up pretty well. 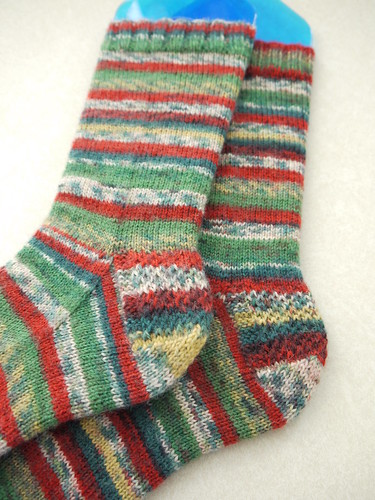 These little stripes make me happy :) 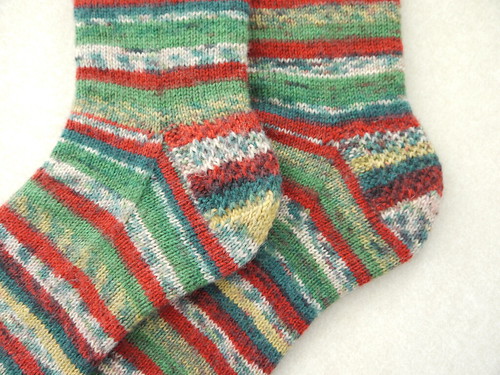 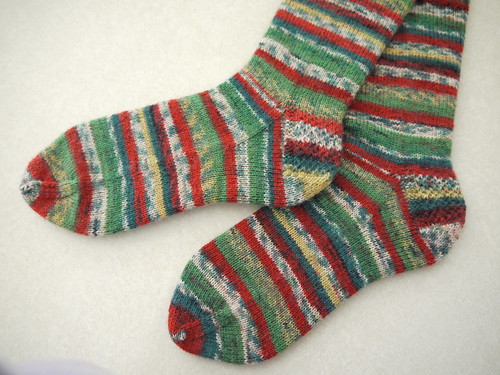 My knitting goals this year are not really finalized yet, they might not ever be! I would like to knit eighteen pairs. I'd like one of those pairs to be my first Fair Isle pair! And like last year, I'm going to try and knit more from stash and from my library. (I'm not ever going to try a "stash diet" again because that totally had the opposite effect!!)

Last post I mentioned I was having a hard time finding interest in casting on new projects. Maybe it was more of a drive to finish WIPs and feeling weird about having a bunch of new projects at the start of the year. I mean, you don't get much more of clean slate than January 1st. Anyway, I did cast on something new! They're socks for Scott; I'll post a picture next time. They're not very far along!


There's been more Mrs. Weasley's knitting; it's living in my new bag from Love Sock Wool:


So I have also been having a hard time getting into books lately, it seems. I'm about one third of the way through The First Fifteen Lives of Harry August and I just have a hard time with it. It involves time travel and lots and lots of philosophy; I really dislike philosophy. It's just not my cup of tea. My dilemma is there are parts in the book that I absolutely love, the dialogue, the prose, the characters, are all excellent. It's just the other part. And I think the deeper in the book I read, the more prominent philosophy and that type of writing will become. Ugh. I put it on hold to start Sure Signs of Crazy, which was on sale and seemed like it could be a sweet bildungsroman...... I just can't. It was discouraging to give up on two books, one after the other. I want to love everything I read, but it's also good to know when to stop a book that just isn't doing it for me.


I decided to purchase a few audiobooks that I've previously read and loved, but never listened to. Stardust and The Night Circus are going to get me through this slump! Stardust is written and narrated by Neil Gaiman, who is probably my favorite author. He is such a masterful storyteller, and it's the ultimate treat to hear his work. I used to buy his books because his words on the page are something to savor, but to hear him read...... just outstanding. And The Night Circus is a magical story, and read by Jim Dale, whom I adore! (Have you listened to his Harry Potter performances?!)

What are your favorite reads? or audiobooks? Are there books you read and reread when you don't know what else to read?

I wish everybody a very happy weekend!!

Hi friends! I hope the new year finds you well. My new year started with some gorgeous handdyed yarn from Desert Vista Dyeworks: 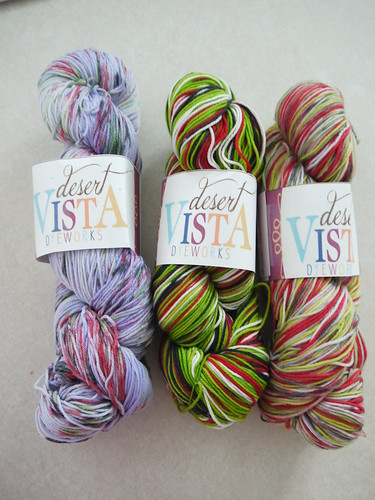 Oooh!! The colorways are Zombody Lavender Decomp, You're a Mean One, and Zombody's Bobbin for Apples ♥ I can't wait to knit these into socks! I lust over the pairs I see on Instagram...can't wait!


Knitting after Christmas is kind of weird. I feel that I should be knitting for someone, and the prospect of casting on something new is daunting. Does anyone else feel this way? Right now I'm just focused on two pairs of lingering Christmas socks and both mitered square blankets.


I have Evergreen socks by Madeline Gannon on the needles. I finished one sock and just need to cast on the second. I'm using a very special skein of Cakewalk in Peppermint Bark: 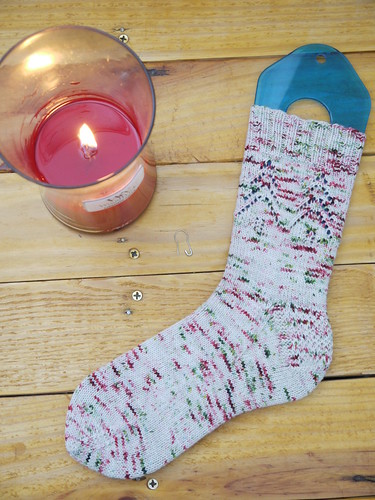 This is a super pattern. The small amount of lace is nice because it adds just enough to a simple sock and it's just the right amount for this yarn, which could definitely distract from the pattern were it an all-over pattern.

And the second pair is a vanilla sock with Red Heart and Sole in colorway Christmas: 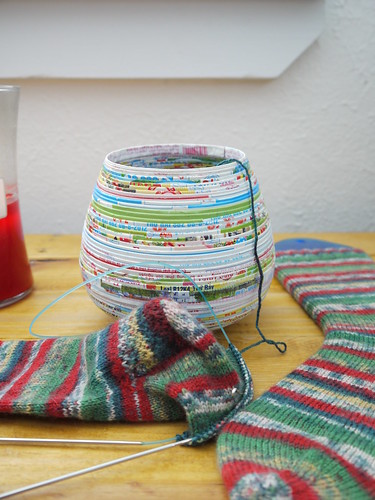 I've always wanted to knit this colorway since seeing socks on someone's blog years ago... but then I couldn't find the yarn anymore. Just this year the local Joanns had it and I nabbed two skeins. It's a very nice, inexpensive yarn, and I feel that it will hold up well. It feels silly to still be knitting Christmas socks! Ah oh well! 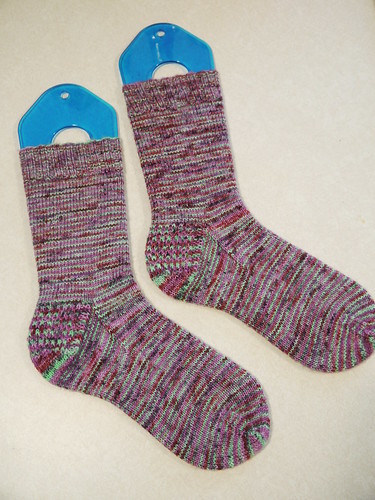 Gaaaah! I love these socks so much!!! The yarn is handdyed by Lyani Yarns in Sugarplum Fairy colorway...with glitz!!! (which you can't really see in the photos..) 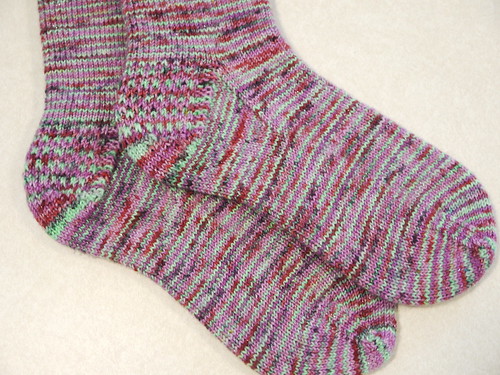 Modified Eye of Partridge is still my favorite heel 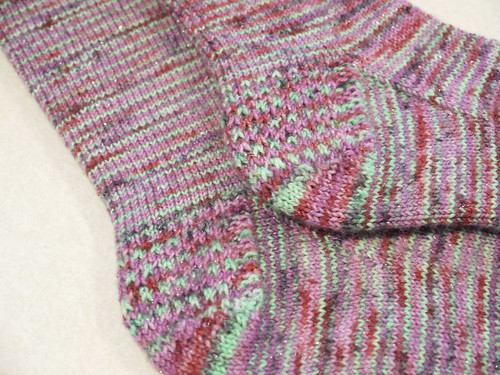 They are so, so, SO pretty. And the socks are cushy and boingy. I wore them as inside socks for about a week, that's how nice they are ♥ 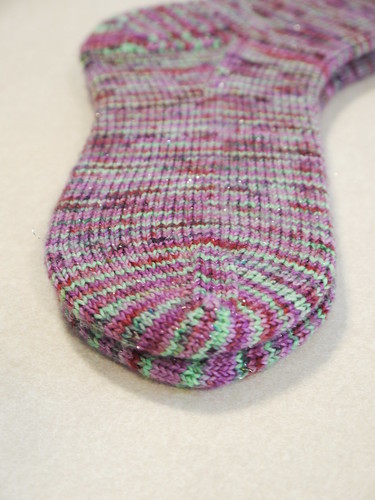 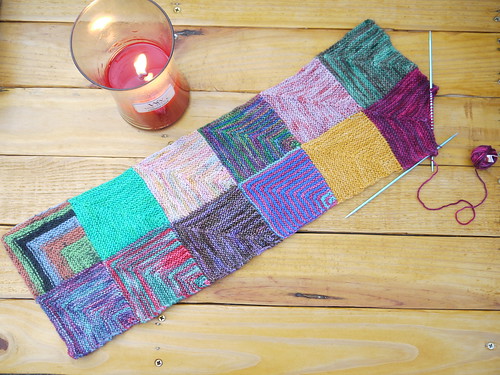 I'm getting there! This is the fourth quadrant; just four more rows after this then I'll seam the quadrants together and knit a border! I haven't really decided on how I'll knit the border. I might follow the directions from Hue Shift Afghan, or maybe i-cord.


Alright!! Hope everyone has a wonderful week! xx
Posted by Unknown at 2:40 PM No comments: