Hi friends! We woke up to snow! Today will be spent being cozy on the couch, knitting, with Berny :)

I thought I had written about my new adventure, but I just looked back through the posts and realize I haven't! So, my adventure is that I'm learning how to .......


A lot of friends on Instagram are spinners and I'm so envious of their gorgeous handspun yarns! And it makes me really excited to think about knitting with yarn that I've spun - I think that's the coolest thing. Ever. I'm learning on a drop spindle and roving that I purchased from Joseph's Coat: 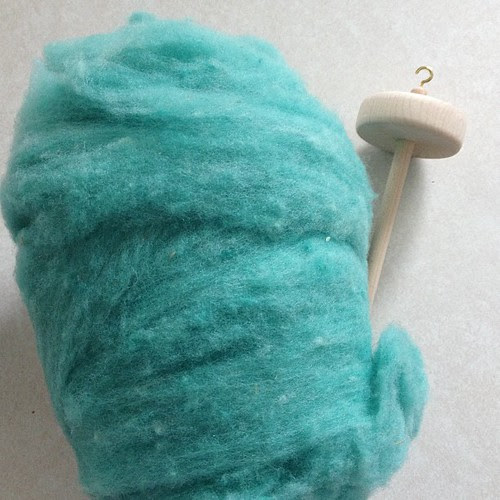 I honestly can't remember what kind of wool this is, but I want to say it's BFL. There are little seeds and bits of grass in it... which I kind of like because it gives the wool a natural feeling, yet, I don't want it in my yarn! I had an option to take a class with the LYS owner, but for now, I think I will practice on my own. I borrowed a few spinning books from the library and have been watching a lot of videos on YouTube. I really like Tanya's 'Learn to Draft Fiber' video:

(Tanya is also the owner of A Yarn Loving Mama Etsy shop and has beautiful handmade drop spindles, roving, and stitch markers)

I've spun about half of the blue roving so far! My first spindles-worth is lumpy, uneven, and has too much spin in it - but I'm going to keep it :) I started again, being more mindful of keeping it smooth and putting less spin in. It is slow going because I don't practice every day... I think that might change because I just received this gorgeous hand-dyed roving from Amanda at Pretty Penny Fiber Arts: 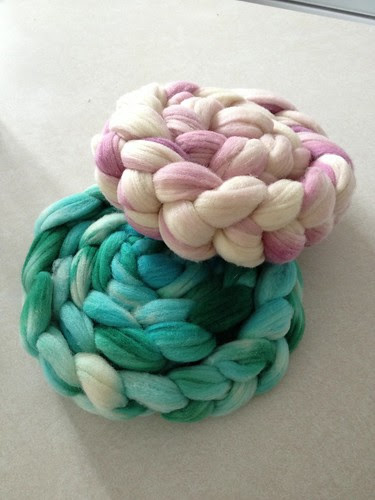 So lush! They are incredibly squishy and smooth and beautiful... I just love them. I am peeing myself because I want to spin them so badly, but I also don't want to undo their perfect little braids!

Stay warm and safe out there!
Posted by Unknown at 8:31 AM 3 comments:

Fiiinally writing about my goals for this new year :) I added a new page link (under the header) to keep track of my progress.

One of my goals this year is to make more homemade meals. It's not that we eat out a lot, but it's really easy to fall back on canned soups or chili, and I'd really like to cook more healthy. I won't share every single meal, but maybe the recipes that are new and delicious. I've started planning the week's meals and shopping for all the ingredients on one day. And holy cow has it helped! It means I'm more conscious about only grocery shopping one day a week, stocking up on pantry staples, and using up produce before they expire. It takes some strain off me too, because when I get home from work, I already know what to cook. And since Scott is always home before me, he can start prepping.

So, to start it off, we made Skinnytaste's Baked Potato Soup the other night: 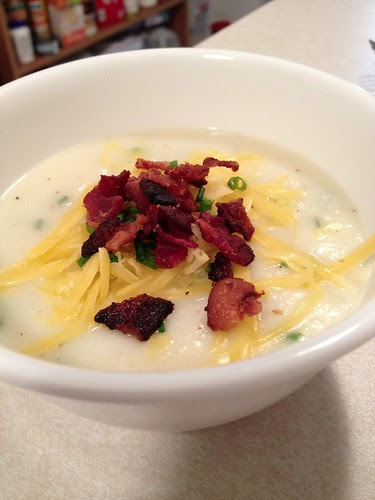 it was very good and very easy! The main ingredients are potatoes and cauliflowers! Crazy, huh? You end up cooking them until tender, then pureeing, and that's added to the chicken broth and milk. I like this soup because it isn't heavy or greasy, but the cauliflower helps to add body. I also learned you can cook a potato in the microwave :)


I hope you all have a great weekend! I started a pair of stripey green socks that I will be knitting on today.

This post is more along the lines of what I had in mind to break my absence. Thank you everyone who sent me a message yesterday about my weird experience. Your thoughts and comments calmed my nerves and I slept very soundly last night :)

A few things I've been working on:


And I finished my Zombie Vixen mitts for the Instagram KAL!


It was a fun KAL and the variety of colors used was awesome! Self-striping, acid green, speckled, jewelly blue...and they all looked GREAT! This was the perfect KAL project for me because I really needed the support of other knitters to finish. The cables are beautiful, but they aren't fun for me, you know? Fair Isle, garter stitch, miles of stockinette stitch, those are fun to me. But this project does give me hope that I will be able to knit cabled socks, and I have quite a few in my queue that I'd love to knit!

I used a darning needle instead of a cable needle. Some of the KALers cabled without a needle at all, and I tried it but didn't catch on. Maybe the next cable project I will try again. It was an easy to follow pattern (available for free on Ravelry), with line by line instructions for cables.


I counted my knitting totals for 2012, and by far, I knit monsters the most!

It makes me wonder what I will go knit-crazy on this year :)

Hoping everyone has a happy Tuesday,
Jesse
Posted by Unknown at 8:00 AM 8 comments:

I would have liked a different post subject to break my blogging absence. But I am really creeped out!

Ok, Scott leaves for work everyday at the same time. It's early, and I try to wake up with him but usually sleep in. Today, he left like normal and I fell back asleep. I woke up to him touching my leg and then heard him leave through the garage. I figured he forgot something and needed to come home to get it, but didn't want to wake me up. It was 7:45 am. I texted him, "Was that you?" and he writes back, "???"

I checked all the doors and windows, everything was locked. Everything looked to be in order. Berny was sound asleep on the couch.

The best I can come up with is I was somewhere between sleep and wakefulness, and mistook the events for reality.

I hope everyone had a happy holiday season! Time is really escaping me and once again, I have many things to share with you.

All of the Christmas knits were well appreciated, which made me feel very good. The only knit that needs reworking are dad's socks, which are too short :/ easy fix, I just don't want to look at them anymore!

My last two finished objects of 2012 were: 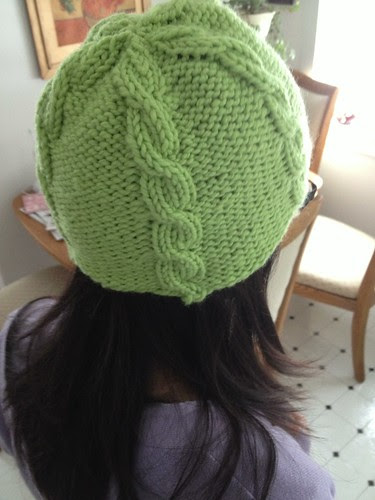 It's a fast and fun knit. I used stashed bulky yarn; the pattern calls for worsted weight held single or doubled. I might tink back and knit it a bit longer; as it is, unblocked, it doesn't quite cover my ears completely. 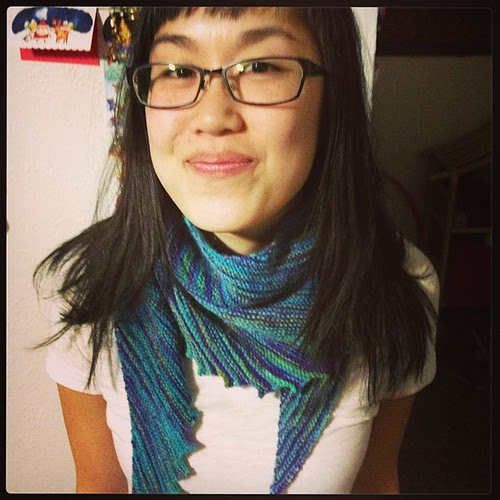 I looooove this pattern so much. It was a relief to knit something that wasn't on a time frame. The pattern is simple yet engaging, and it was perfect to knit while finishing The Night Circus (which I loved).

I received this yarn from Scott, for Christmas. It's Knit Picks Imagination in Mermaid Lagoon. I still have one skein left...

And I received the pattern from wonderful Andi. I know I will be knitting this scarf over and over, it has become my favorite.

A few projects I'm working on:

The Zombie Vixen mitts is a knit-a-long I've helped start on Instagram. There is also a Ravelry group with a thread dedicated to the KAL if you aren't on IG but would still like to participate! 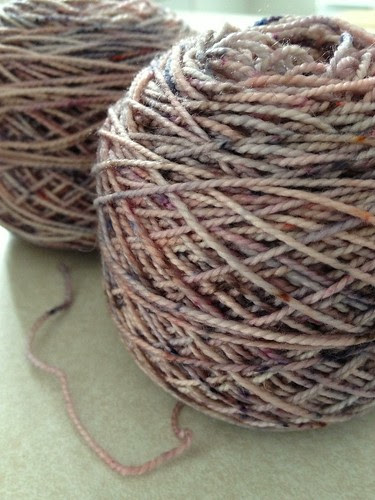 The Frosted Pumpkin Stitchery gals have done it again; they've designed a new cross stitch sampler that starts TODAY! It is called the Woodland Sampler. 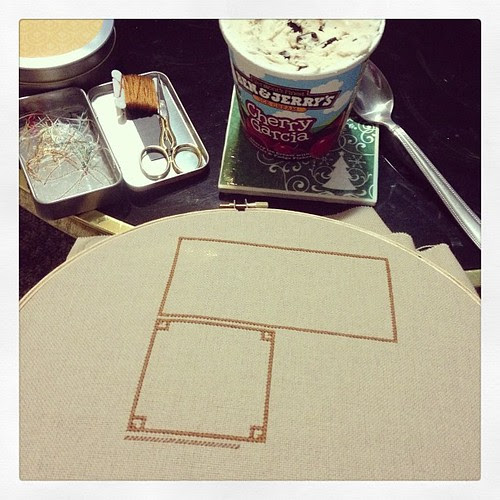 I've been stitching the frames and am waiting for the January's design to come out :)

and there is one more KAL I want to join, I'm just deciding on yarn. It is 22.5 Degrees by Martina Behm. I am obsessed with her designs! Garter stitch is just so smooshy. There is a Ravelry thread for the KAL too :)