We added three new succulents to our windowsill garden. One is a living stone, one is an echeveria, and I can't remember the other :) The echeveria has a few flowers so I am going to try and propagate them! I haven't tried this before, but I found a few websites with great instructions.

Succulents are the one plant that I haven't killed yet. Or, almost killed and revived, because I have done that a lot too. They are very easy to grow! 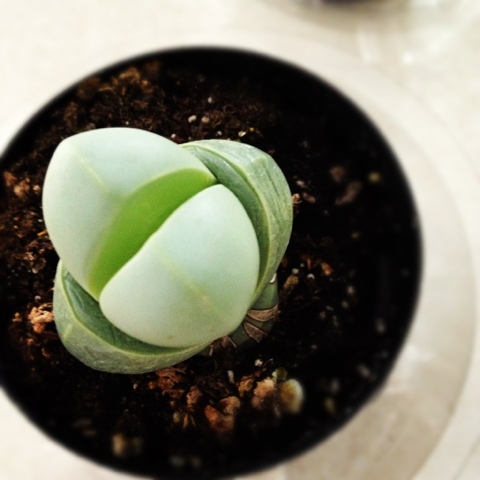 Posted by Unknown at 3:24 PM No comments:

I thought having a cell phone with internet capabilities would mean I could blog more often... the problem is I can't figure out how to format the text and the pictures to my liking. As it is, whenever I add photos to my (phone) entry, they always appear at the end of the text. And no matter what I do, I can never put text below the photo. This is alright if I only have a photo and a quick sentence to share. But sometimes I just have more to share.

This past week, Loopy Knit and Crochet had an awesome sale, which I only made to once (sad, I know). But truthfully, I get way too overwhelmed in nice yarn stores to think straight. I end up walking circles around the store, touching every yarn at least three times, and buy stitch markers. But this time I knew I wanted some no rinse wash and DK weight yarn for two different pairs of fingerless mittens.

This is what I came home with: I am not completely positive that these aren't actually sport and worsted weight yarns, because when I looked them up in Ravelry's yarn database, they were not listed as DK. But on Loopy's tag they are listed as that! So I am unsure. The blue hank, which is Blue Sky Alpaca's Melange, is so incredibly soft! Last night I cast on the Cafe au Lait Mitts with it, but this morning I changed my mind. I frogged what little start I had made, and printed the pattern for Later, Gator! I'd much rather feel the alpaca against my face!

Yesterday I also used the Eucalan no rinse soak. It has Eucalyptus oil in it and smells divine! I soaked mine and Scott's socks, his Howler Monkey hat, and a Fair Isle hat that I've never worn. I used one teaspoon for one gallon of tepid water. I'm not really sure if it's better to have more room between clothing or if it's alright to jam pack it. After they had soaked for fifteen minutes, I squeezed the water out by hand, and then by rolling each piece in a towel. I was a little disappointed that I could still smell the Patons wool even after the soak. If you have ever gotten Patons Classic Wool wet, you know what I'm talking about. Hopefully with a couple more washes, that smell will go away.

I finished my first commissioned project! It was a very exciting process and I can't wait to have another order!

The yarn is Patons Classic Wool in Gray mix and Black. 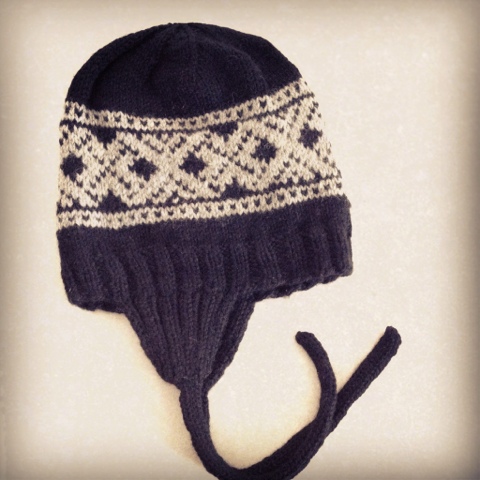 Posted by Unknown at 8:57 PM No comments:

Even though I finished the monster for my partner awhile ago, I didn't want to post pictures here until she had received her package. 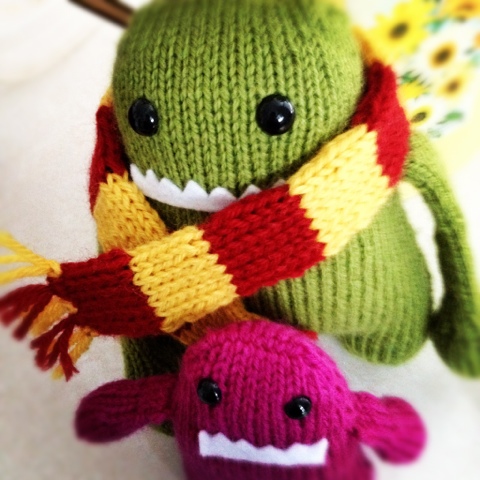 (the pink one was for Penny) I decided to make a Gryffindor scarf for Baldwin because both my partner and I are Harry Potter fans! 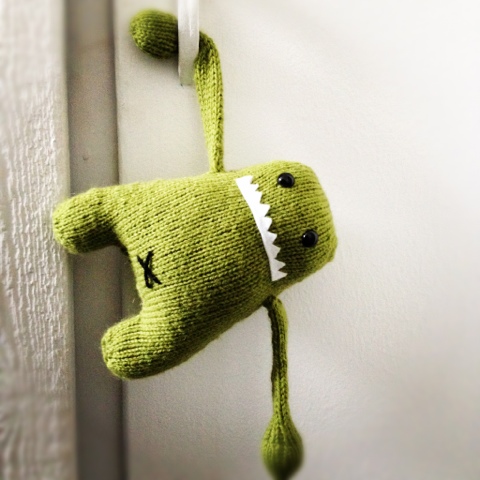 And this is the sweet package I received from my partner: 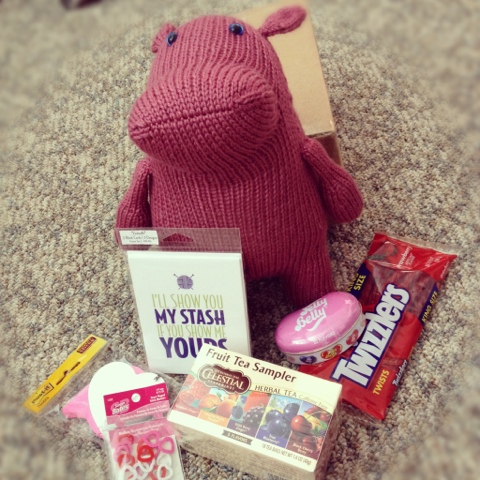 She made me a Harriet! And she used blue eyes rather than the standard child safe black ones, and I think they look so neat! She also included heart shaped post it notes, heart shaped stitch markers, a box of tea, licorice, Jelly Bellys, and knitting note cards!!

It was such a fun swap to participate in and I definitely want to join another one!
Posted by Unknown at 9:01 PM No comments:

Half of the succulent that was repotted yesterday: 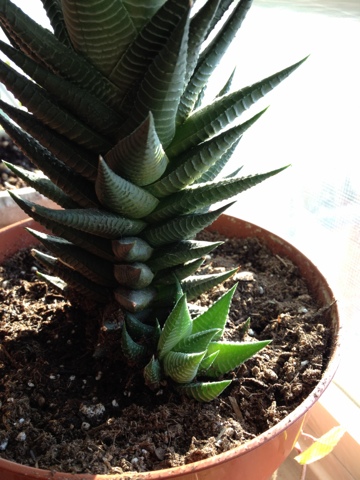 Today was a day of productivity:

Early morning trip to Costco to beat the rush, and it was a really good idea.

Helped Scott finish putting together shelves in the garage. Now all the recycling and odd ends are off the ground and organized! It looks so much better in there.

We took cardboard and glass to the recycling center, and that always clears up a lot of space :)

Repotted some succulents :) I have no idea what kind they are, but one started growing a baby succulent.

I've been reorganizing the kitchen for the last week. We're limited on counter space and cabinets so I'm really trying to optimize what we have. I think I made some good rearrangements today, as long as I remember where I moved things :)

And at the moment, I'm finishing a Valentine's monster for a friend. Pictures soon.

This is a shot of the screws and washers for the shelves: 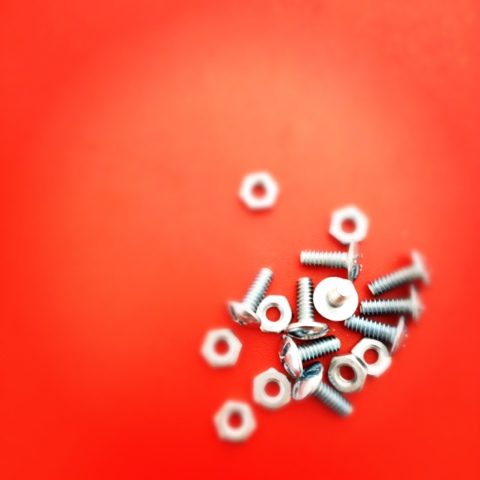 Posted by Unknown at 9:53 PM No comments:

I've already knit two skeins of yarn into Scott's socks, and had to break into the third today. I used a scale and it was so handy; each cake now has the same yardage. But it really doesn't matter with these socks because I only have about three inches left and won't need all the yarn. It was still fun playing with new hardware :)

Scott tried these on tonight and they fit so well! Did you know his big toe is two and a half inches long?! Giant. 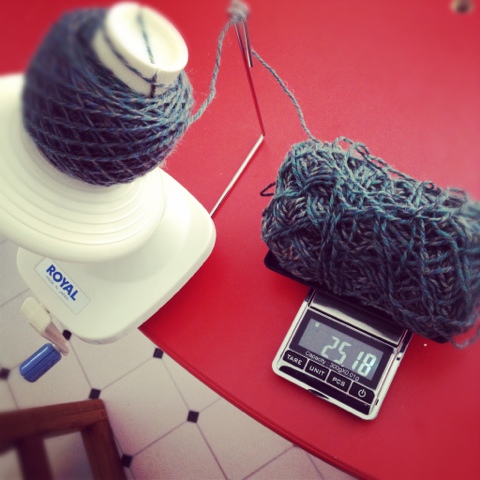