Sssh....they're a gift. The recipient knows what I'm up to, but she doesn't know what they will look like!! I am super stoked with my progress and how they (actually, I'm still on the left mitten) are knitting up ^-^

I also think I'm going to start the 30 Days of Lists challenge. The new list has already begun, but I think you have to pay for it... if I DO start the challenge, you can expect a post a day, which will be the challenge in itself.
Posted by Unknown at 10:13 AM No comments:

Our last day was a good one. We decided to do some last day immersion and drove back into the park to hike to Fairy Falls. On the way there, we detoured to Firehole Falls, which was an awesome idea. It was a beautiful drive through a narrow canyon, with the mountain on one side and the river on the other.

As we tried to turn back onto the main road, we were traffic jammed by a bison! We saw him walk through the intersection, plodding down the road like he was a car.

The walk to Fairy Falls went along the Midway Geyser Basin, which was gorgeous! The water must reflect against the steam, coloring the steam! This hike went directly through burn forest that is recovering. Most of the trees were still very short, but in some areas, they were taller than us. Trees closed us in, and I can only imagine how much more claustrophobic it would have been to walk this before the fire. We ate a small lunch from our cooler and then hit the road again. It was a little sad leaving, because the trip felt too short and lacking on the bison-sighting front.

But then, a few miles from the West exit, we caught up to our plodding bison friend! He was still walking in the right lane of traffic, and he had found a friend to walk with! (another bison). It was an awesome way to end the trip =)
Posted by Unknown at 8:10 PM No comments:

During the second night while we were camping, it started to rain. A few years ago, Scott and I camped in Oregon... no wait, we set up our camp IN the rain, slept IN the rain, and woke UP to rain. Our tent and sleeping bags were soaked. And for some reason ever since, I've been scared to camp out in the rain. BUT this night, we were nice and dry. However, we didn't have any protection over the camp area so we cooked in intermittent rain. Which wasn't too fun.

It was raining off and on all day, but we decided to try and sight see anyway. Next we visited Gibbon Falls, which was beautiful! (but full of humongous crows) We tried to walk the Artist's Painted Pots, but just as we started the walk, it began to rain quite heavily and Scott didn't even have his jacket on.

And then we went back to camp, saw it was still soggy and rainy, and booked a room in West Yellowstone.
Posted by Unknown at 7:54 PM 1 comment:

On the drive to Yellowstone, I detoured us to Bozeman because the Yarn and Fiber Place was having a sale (hehe). I purchased two hanks of Cascade Luna Paints for a scarf (but the yarn isn't quite what I expected and won't be used in it's intended way, sadly).

The first night we met up with Scott's parents and his mom's dad and his wife, at Bullwinkle's in West Yellowstone. I had never been to West Yellowstone before and was amazed. It is a little big town! It has all the conveniences of home and modern life, right next to a great wilderness. So weird. But I did end up enjoying my stays in hotels... especially when it rained. and the clouds were as glorious as ever.

Day Two to follow.
Posted by Unknown at 6:52 AM No comments:

Yellowstone! We left last Wednesday and returned on Saturday. It was sort of a birthday trip (for Scott) slash meet up with his grandpa and grandma slash take off much needed time from work. I had never been to the park in autumn time only spring/summer, and it was still so beautiful. It was during elk mating season and we saw the biggest bull I've ever seen studding it up with four lady cows.

Pictures to come as I upload them to Flickr.

Unfortunately, I caught a cold somewhere along the line and am still feeling it. But I went to the doctor today and she says it's only a viral cold. I have a prescription for some cough medicine, so hopefully I will stop coughing so much!
Posted by Unknown at 11:46 AM No comments:

I'm still here =) I've been very busy with work and running. Although, the forest fires have been so bad that I don't like running in the smokey air, so I really haven't been running very much this past week. Right at the beginning of the horrible fires, I did manage to run a race with Abbey: the River City Roots 4 mile: 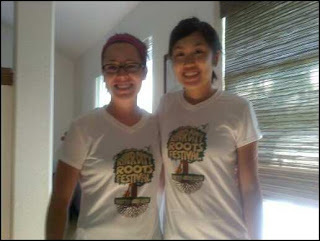 It very fun and went through a beautiful part of Missoula. yay!

And guess what? I've picked up my socks again! I think I started knitting them in May but stuffed them in a bag a few months ago. I pulled them out and have finished the legs, heel flaps, heel turns, and am decreasing the gussets! The heel turns scared me because they're short rows but once I started, they were a piece of cake. The gussets were actually the most difficult part (aside from the cast on) but I found a few good videos online. I see the benefits of knitting two at a time on Magic Loop, but I can also see the benefits of knitting them on double pointed needles. I imagine if I ever wanted to knit knee socks I'd probably opt for dpns. Magic Loop is definitely messy, with yarn tails everywhere.

But oh! I am getting so excited at my progress! I will never look at a sock the same way again. Including mass-produced ones, because they're all made with the same basic pattern. And it's cool!
Posted by Unknown at 2:55 PM No comments: